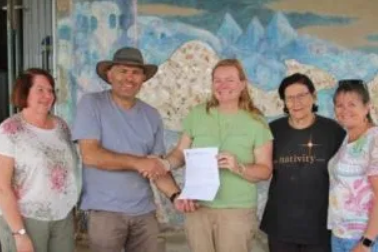 WORKING TOGETHER IN MISSION

Events in the United States often impact the rest of the world. Though World Methodist

Evangelism is a global organization working through a network of 80 million Methodist
Wesleyans in over 130 countries; I feel it is important to speak out on the current unrest
unfolding in the US.

I have been trying to mentally and emotionally process what has been happening
recently in my country, the United States: to comprehend the storming of government
buildings and escalating threats of violence. It demonstrates the universal human
response when people feel their rights are being denied or their freedoms restricted.
When I think about US history, it makes sense. We Americans have always protested
injustice. From the American Revolution to the Civil War, when we believe our freedoms
are being taken away, we protest. When we feel the government is “treading on us,” or
limiting our rights, we protest. All of us can understand the anger and frustration that
arises when we feel the government is exerting too much control over our lives.

It makes sense on the one hand, but I’m confused on the other. Because I never
thought armed protests and people with AK-47s storming a state capital would happen
over the issue of reopening hair and nail salons or being asked to wear a mask.

Now, protests have occurred again in my country – many peaceful, but not all. And they
too have been in response to restricted freedoms, denied rights, and excessive control.
We ought to all be able to understand how that feels, at least to a certain extent. Afterall
we are all human.

But there is a difference here.

I’m part of a global Methodist Wesleyan movement that has not shirked the
responsibility of speaking truth to power. My personal mentors in this movement fought
Apartheid in South Africa and Jim Crow in Mississippi. They taught me to understand
that, in contrast to people protesting in response to lockdowns and masks, what is
happening at this moment is in response to a much deeper spiritual problem.

Some call it racism, but for me that’s too general a word to describe the US context. The
spiritual problem besetting this country is white supremacy. It’s not a new problem, and
it’s not the domain of the alt-right. Our country was founded on the assumption of white
supremacy. It undergirded the Doctrine of Discovery which was crafted in the mid-15 th
century and continued to be used until the mid-20 th century. It influenced the drafting of
the US Constitution, was a foundation of the slave trade, and was the germ of the idea
of America’s manifest destiny.

The assumption that people who believe themselves to be white are superior to others
is the scaffolding on which our society has been built. It has infected us to such a
degree that we have great difficulty recognizing it as sin, and many have already
stopped reading this because I’ve suggested that it is. And yet, whether we are willing to
admit it or not, this enduring sin of white supremacy is continually laid bare by the
ongoing killing of those labeled black. From the disregard for Africans kidnapped into
slavery through the murders of Emmett Till, Trayvon Martin, and Aiyana Jones, to
Ahmaud Arbery, Breonna Taylor, and most recently George Floyd.

As a Christian, American, and one labeled white, the most painful part for me in this
most recent of tragedies, is the reminder that the church identified as white has been for
the most part silent regarding this besetting sin of ours; and because of that silence, we
have been complicit in its consequences. Through our white flight, we’ve created
bubbles of white privilege, quarantined ourselves from suffering, and consciously or
unconsciously put ideology – including the ideology of white supremacy – over the call
of the Gospel.

As Christians, we believe the Spirit of Jesus lives in each of us – we celebrated that
belief only a few days ago on Pentecost Sunday. When Jesus first spoke of the Spirit,
he said, “The Spirit of the Lord is upon me, because he has anointed me to bring good
news to the poor. He has sent me to proclaim release to the captives and recovery of
sight to the blind, to let the oppressed go free, and to proclaim the year of the Lord’s
favor.” (Luke 4:18-19)

If the Spirit of Jesus lives in us, then we are to bring good news to the poor, proclaim
release to captives, and to set the oppressed free. And yet, George Floyd’s gasps of “I
can’t breathe!” illustrate with overwhelming clarity, that we have not done so.

The reality of life in America is that nothing changes unless enough people identified as
white want it to change. That means the question for Christians in America is are we
willing to break free from the narrative of white supremacy? Are we willing to admit that
if all lives really matter, then Black. Lives. Matter. Are we willing to trust our black and
brown sisters and brothers when they tell us that there is another narrative of life in
America and that it involves over-policing, poverty, environmental catastrophes, food
deserts, and little access to health care and proper education? Are we willing to trust
them when they tell us that they were deemed “essential workers” until they got sick,
and then were turned away when they sought testing or treatment for COVID19?

If the Spirit of Jesus is alive in us, we must be willing to believe that our sisters and
brothers identified as black and brown are telling us the truth about their experience in
this country.

I believe them. And because I believe them, as an American I will do the following
things:
 Call my friends identified as black and brown to offer solidarity and care.
 Lead WME in a way that honors and nurtures the gifts of all people.
 Work to end educational inequality in this country.
 Work for processes and procedures that ensure the right of every US citizen to
vote and to have equal representation.

There is so much to be done, but as a Christian, American, labeled white, I can start
with this.

A Response to Recent Events in the United States

We use cookies to ensure that we give you the best experience on our website. If you continue to use this site we will assume that you are happy with it.Ok